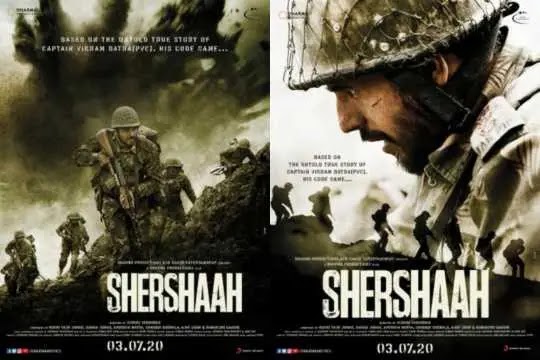 The movie is directed by Vishnuvardhan and co-produced by Karan Johar. Based on the life of Param Vir Chakra Captain Vikram Batra, the film is starred by Sidharth Malhotra who is playing a double role, one as Captain Batra himself and another one as his twin brother Vishal.

Kiara Advani is playing the female lead role. The movie was announced in May 2019 and completed in January 2020. The film’s first-release posters were unveiled on January 16, 2020, with a release date of July 3, 2020.

In 2018, Karan Johar confirmed that he would make a biography of the life of Captain Vikram Batra. Sidharth Malhotra was selected by Karan Johar to play dual role as Batra and his same twin brother, Vishal.

After a conversation with several actresses failed, Kiara Advani was signed to portray Batra’s fiancé, Dimple Cheema. Malhotra began military training for the film on April 17, 2019. Prior to the film’s official announcement, it was assumed that the title would be “Mera Dil Maange More” but later became “Shershaah”.

The film was officially announced on May 2, 2019, with title and shooting location in Chandigarh, Palampur, Ladakh and Kashmir. Major photography finally began on May 7, and the film was completed on January 12, 2020.